The Truth About Stocks: Patience Pays

We had a client, Rip van Winkle, who invested in stocks at the beginning of 2001, and then fell asleep. By the end of 2002, the stock market had declined 49%. Rip slept through it.

The market rebounded over the next few years until October 2007. Rip slept through that too.

After that, the market dropped by 57% until it bottomed in March 2009. Rip slept through that as well.

Many investors who were awake for those 20 years didn’t do as well. They micro-managed their investments, pulled money out of the market at every momentary downturn, got swayed by their emotions, followed forecasts, and tried to outguess the market. Rip didn’t do any of these things. He just slept, and now he’s all set. His patience was rewarded. 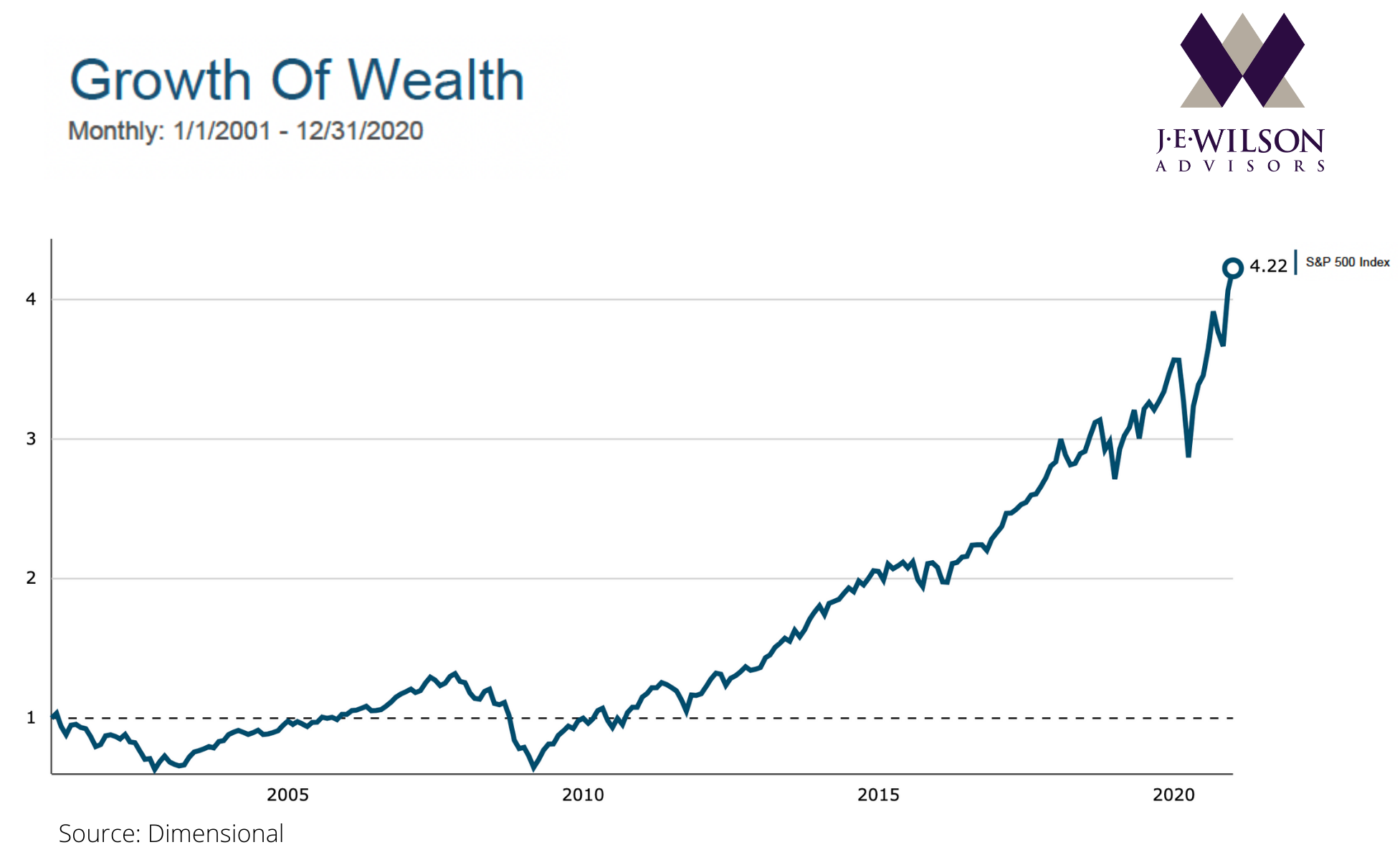 How Stocks Beat the Alternatives and Inflation Too

There are other things Rip could’ve done with his money. For example, he could’ve just stuffed it in a mattress. If he’d done that, he would’ve had the same amount of money he started with. The only problem is that inflation would have reduced the value of that money by one-third while he was sleeping.

Inflation gradually reduces what your dollar can buy. It’s the silent killer of wealth, “silent” because it operates in the background and isn’t obvious day-to-day. But you can see its effects clearly over the long term. $1 in 2001 is worth only 67 cents today. That’s why a postage stamp that cost 15 cents in 2001 now costs 58 cents. If Rip had stuffed his money in a mattress, inflation would’ve eaten away at its buying power while he slept. Something similar would’ve happened with many other investments. 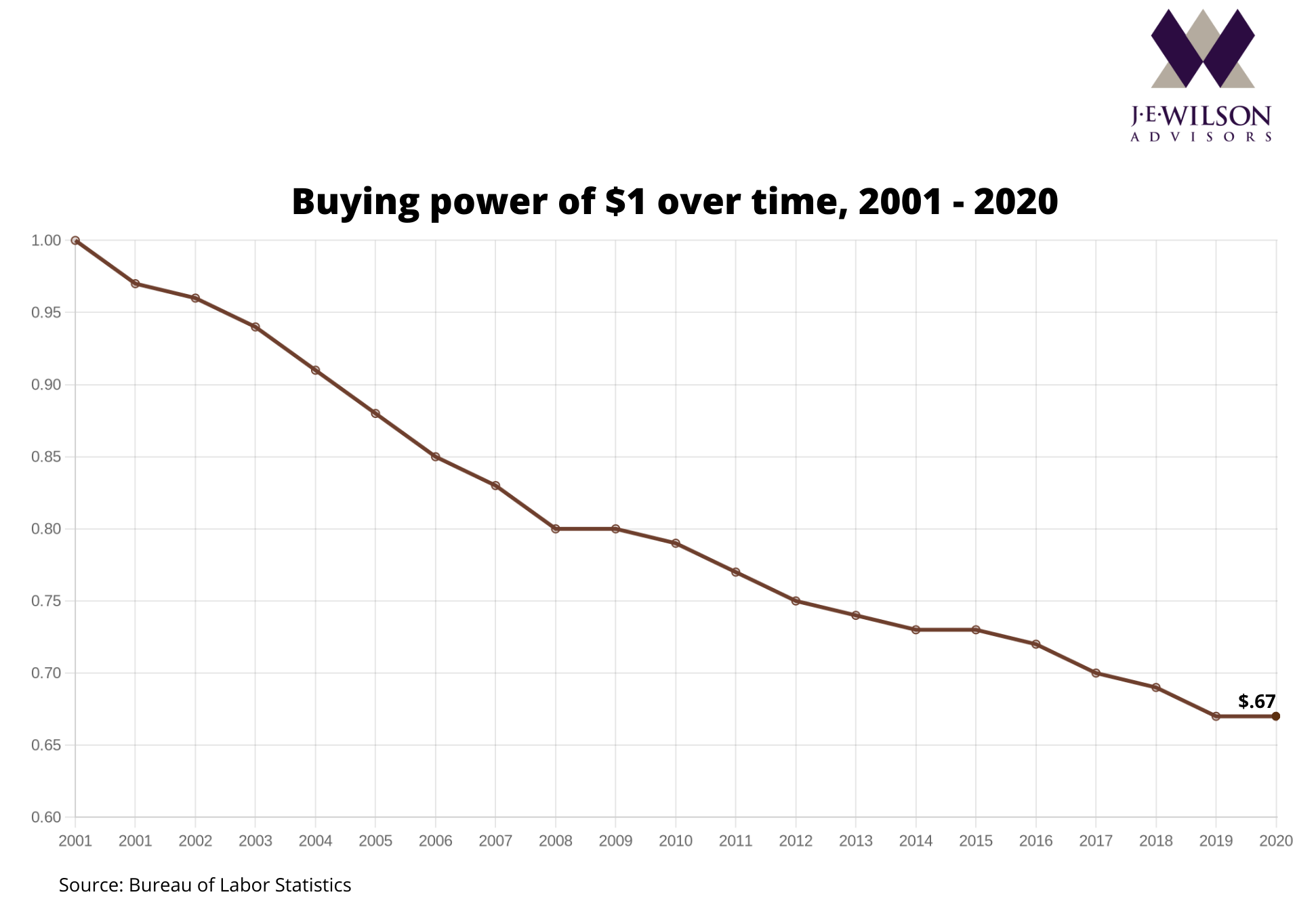 If Rip had invested in Treasury Bills, his money would have grown at a rate of 1.4% per year—more than hiding it in the mattress but still not enough to counteract inflation, which eroded the value of his money at a rate of about 2% per year.

Six-month CDs were another option. Their annual rates of return ranged from 5.5% in the early 2000s to under 1% for most of the later years, but their average yield for the 20 years was still less than the rate of inflation.

Intermediate-term bonds fared somewhat better, posting returns of about 4.5% per year. That outpaced inflation, but it didn’t come close to the 7.5% per year Rip earned from stocks.

It turns out that Rip invested just like he needed to. You can too. Market history shows that stocks outpace inflation over time.   All you have to do is invest in the market, diversify, and wait.

The waiting is the hardest part. It’s difficult not to trip yourself up and tinker with your portfolio just when you should keep things as is. The reason is that we’re emotional creatures, and these emotions spring into action whenever we perceive a threat. But as Rip’s story teaches us, most of these “threats” are transitory.

Nature designed emotions to be rapid responses to immediate threats. It didn’t design them for long-term planning. That’s why emotions aren’t very good for long-term endeavors like investing.

Many investors would actually have done better for themselves if they’d fallen asleep like Rip. Instead, they were vulnerable to their emotions and ended up making sub-optimal decisions. Now they’re not prepared for retirement as Rip is. This might have been Rip’s fate too if he hadn’t fallen asleep. He invested at the beginning of a two-year market decline. If he’d stayed awake, his emotions would surely have tugged at him to pull out as many other people did. Fortunately, he slept through this period of anguish and tumult in the market, he kept his money invested and benefited in the long term.

Why Zooming Out Is the Ideal Strategy

Here’s an analogy for understanding the ups and downs of the market. Imagine watching a satellite view of a car driving from Charlotte to D.C. If you zoomed in and watched the car’s movements minute by minute, you might not know where it was headed. You’d see it jogging this way and that—sometimes East to exit a parking lot, sometimes South to enter a ramp, sometimes West to steer around slow-moving traffic. It’s only when you zoomed out and watched the car’s progress on an hourly basis that you’d see it moving slowly but steadily North.

It’s the same with the market. If you watch market movements on an hourly, daily, or monthly basis, it’s like having a zoomed-in view of the car. From that view, it’s difficult to tell where the market is headed. It’s only when you zoom out and watch the market’s progress on a decades-long basis that you see it’s moving steadily higher. You also see that it’s moving up faster than inflation.

Even if you don’t plan on falling asleep for 20 years, you can still learn a lesson from Rip. He made a one-time assessment of the risks involved in doing various things with his money. He decided that inflation was the biggest risk he faced, and counteracted it by investing in the market. He knew that the market experiences ups and downs on a short-term basis, but he also knew market history: he realized that over the long term market trends are positive, and the returns significantly outpace inflation.

Rip’s approach to investing is even more important today. For the past 20 years, inflation has been negligible, but the next 20 will likely be different. So far in 2021, inflation is running at 5.4% per year. We haven’t experienced inflation this high since 1990. All the more reason to be in the market, and to have the mindset to stay invested.

Patient investors know how to tolerate short-term disappointment, delay, and suffering. This is the mindset that separates them from everyone else, and that enables them to achieve success where others fail. Sustaining patience is difficult to do on your own. That’s where we come in. We provide the “dispassionate discipline” you need to keep moving toward your long-term destination.  Ready for a real conversation?